Dollar purchasing power plunges. Inflation +6.2% from a year ago

By Wolf Richter for WOLF STREET:

The broadest Consumer Price Index (CPI-U) spiked 0.9% in October from September, and by 6.2% from a year ago, the highest since November 1990 (6.3%) and since 1982, according to data released by the Bureau of Labor Statistics today. 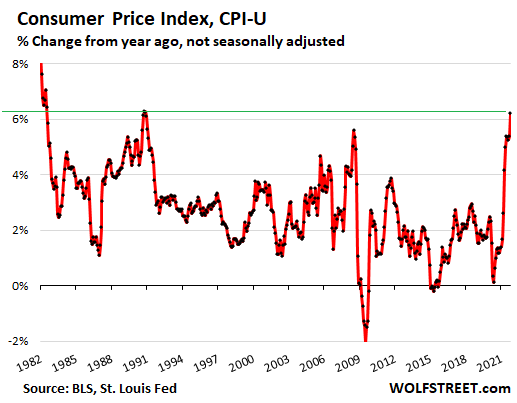 The Consumer Price Index for All Urban Wage Earners and Clerical Workers (CPI-W) spiked by 6.9% in October year-over-year, the highest since June 1982, nearly 40 years ago: 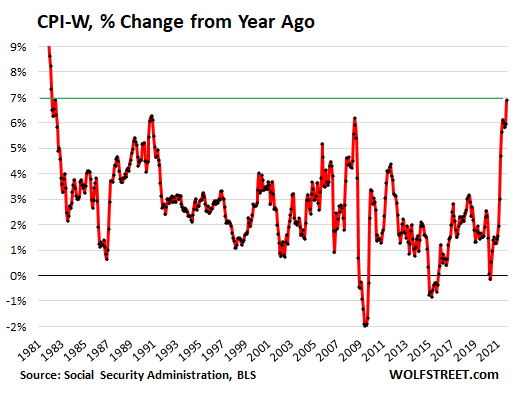 This CPI-W is the index upon which the Social Security COLAs are based, which are determined by the average during the third quarter. The Q3 average of 5.9% set the COLA for 2022 at 5.9%, the highest COLA since 1982, and there was some jubilation among beneficiaries a month ago. But now inflation is blowing right past that COLA.

As Atlanta Fed President Raphael Bostic pointed out, “transitory has become a dirty word.” This massive inflation occurred while the Fed still had its foot fully on the accelerator – $120 billion a month in money printing and near-0% short-term interest rates, meaning “real” short-term rates are at negative 6.0%.

The Fed has been saying over and over again ad nauseam for seven months that inflation will slow down somehow on its own, even as the Fed had the foot fully on the accelerator, and every step along the way, the Fed has grossly underestimated the surge of inflation, and continues to do so. The Powell Fed has unleashed a monster.

Despite the ongoing monetary stimulus, the negative 6% real short-term rates, and the repression of long-term yield via the Fed’s gargantuan balance sheet, Treasury Secretary Janet Yellen said yesterday on the radio that she still thinks that inflation will somehow on its own go back to about 2% in 2022.

And if it doesn’t? Well, she said, inflation would be “watched carefully,” and the Fed “wouldn’t permit” a return to the double-digit inflation of the 1970s. But 6% and 7% and 8% inflation is still OK?

San Francisco Federal Reserve President Mary Daly, a relentless dove on the FOMC, yesterday called the inflation data before today’s release “eye-popping,” but she too expected that inflation will subside on its own despite the gigantic monetary stimulus.

For  them, and for a few others, the enormous demand that $4.2 trillion in money-printing in 20 month has created has nothing to do with this inflation, and that it’s just the supply chains that are temporarily at fault, though they got overloaded by this Fed-generated demand, and the Fed still hasn’t backed off, still hasn’t raised short-term interest rates, and still hasn’t begun unloading its balance sheet to let long-term rates drift higher.

But consumers’ inflation expectations are blowing off the Fed’s propaganda about this inflation being temporary, and today’s truly “eye-popping” data is going to fire up those expectations further, and they’re getting built into the economy, with inflation further up the pipeline spiking at even more eye-popping rates. 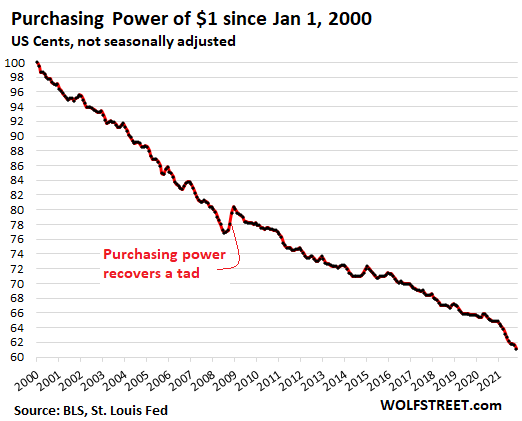 Rent is nearly one-third of CPI, and it’s now rising

Two measures or rent account for 32% of CPI. Last year and early this year, these rent factors had plunged, and had kept CPI from spiking further over the spring and summer. But they made a U-turn in June and are now moving higher but are still holding down CPI, even as a market rents in the 100 largest cities started spiking months ago and in October were up 11% year-over-year. CPI is now following with a long lag.

“Rent of primary residence,” which accounts for 7.6% in the overall CPI, rose by 0.4% in October from September, and by 2.7% year-over-year. In the years before the pandemic, the rent CPI ran between 3.5% and 4% year-over-year. Note the U-turn as surging market rents are gradually filtering into the CPI (red line in the chart below).

“Owner’s equivalent rent of residences,” which accounts for 23.6% in the overall CPI and is a substitute to track the costs of homeownership, is based on surveys that ask what homeowners think their home might rent for. It rose 0.4% for the month, and was up 3.1% year-over-year. 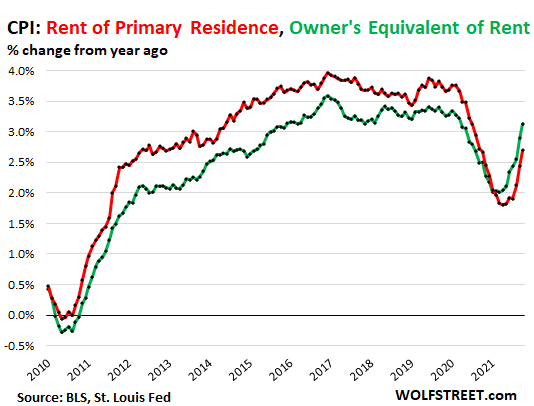 Both measures are still holding down CPI (6.2%), but less than they did before. And market rents are surging, and eventually these two rent measures will do some serious catching up.

However, actual home prices have spiked by 20% year-over-year, according to the Case-Shiller Home Price Index, which tracks price changes of the same house over time and is therefore a measure of house price inflation (purple line below). The index for “Owner’s equivalent of rent” just started easing higher (red line). Both indexes are set to 100 for January 2000: 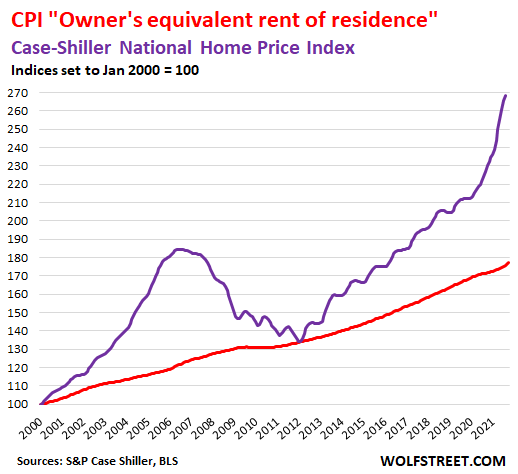 Food costs, accounting for 14% in the overall CPI, jumped 0.9% for the month and 5.3% year-over-year. The CPI for meats, poultry, and fish spiked by 11.9% year-over year, with beef spiking by 20%, which defies the actual price spikes at the grocery store.

Food away from home, which includes restaurants, jumped by 5.3% year-over-year, the most since 1983.

Energy costs, accounting for 7.3% in the overall CPI, spiked by 4.8% for the month and by a whopping 30% year-over-year:

The CPI for used cars and trucks rose 2.5% for the month, after two months of declines, and jumped 26.4% year-over-year.

Wholesale prices re-spiked 5.3% month-over-month in September and 9.2% in October, and were up 38% year-over-year, and 59% from two years ago. There is a lag of about one to two months before wholesale price increases filter into retail prices, and the CPI is now just picking up the first tidbit of that re-spike of the past two months.

This chart of the index value (not year-over-year percent change) shows the three months of wobbling, the new record, and the set-up for the re-spike in the coming months: 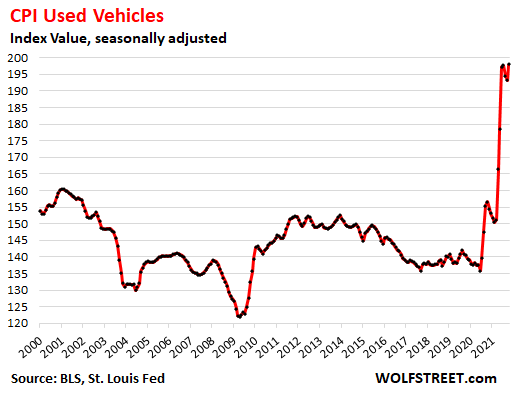 The CPI for new cars and trucks spiked by 1.4% for the month and by 9.8% year-over-year, the biggest nastiest price spike since 1975. This chart shows the year-over-year change: 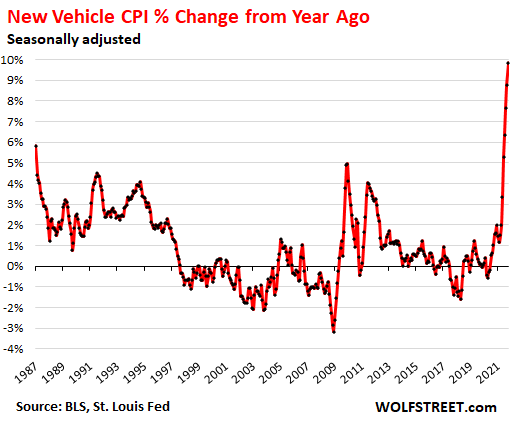 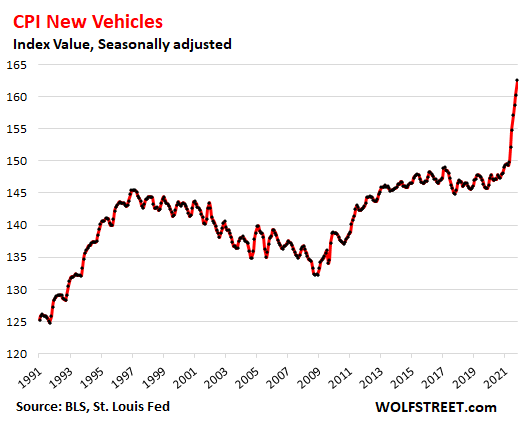 Hedonic quality adjustments are why the CPIs for vehicles remained about flat for the two decades before the recent spikes, when, as everyone knows, actual prices on dealer lots surged.

CPI tracks the loss of the purchasing power of the dollar with regards to the same item over time. When the item is improved, the costs of the improvement is removed from the index. This practice was started in the 1990s. And this makes sense conceptually: Pay more for a better product.

For cars and trucks, these improvements have been enormous. They include consumer electronics, safety features, power trains (such as going from a four-speed automatic transmission over a 20-year period to a 10-speed electronically controlled automatic).

Understating actual inflation – understating the actual loss of purchasing power of labor – has been pursued in the US with bipartisan zeal. Even if the understatements are fairly small each year, they’re cumulative and compound over the decades. And the aggressive application of arcane hedonic quality adjustments is ideal for that.

My F-150 and Camry Price Index illustrates how prices have soared, even as the CPI for new cars and trucks (green line) remained nearly flat until the current spike. The chart will be updated with 2022 model year prices as soon as the two models in the index arrive at dealers: 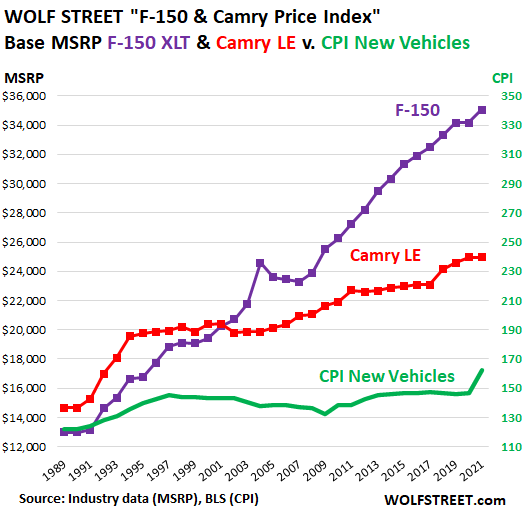