Many Indian techies get paid in crypto, say it’s faster and easier Mumbai — International crypto companies are hiring engineers and back-end developers in India as contractors and paying them in cryptocurrencies to accelerate their adoption and bypass local taxes and laws regarding cross-border payments, crypto industry insiders told ET.

India still lacks a regulatory framework on cryptocurrency, which means they are technically neither legal nor illegal. Many young engineers and freelancers are thus accepting payments in cryptocurrency due to the ease of transferring it across borders, and lower transaction costs compared to bank transfers. ET spoke to a few such employees and found that some choose to receive their entire salaries in cryptocurrency while others receive a portion in crypto and the rest in fiat currency. Some who turned down contracts because they would have been paid in crypto said they were now regretting their decision.

Legal experts said, however, that accepting payment in cryptocurrency falls in a legal grey area and that such transactions could be in violation of the Foreign Exchange Management Act (FEMA) as they constitute cross-border payments in a currency not recognised by the Reserve Bank of India. The lack of clarity on whether India will treat cryptocurrency as a currency, a product, or both, adds to the confusion around how to tax it, experts said.

“Any payment against goods or services across borders offered by an Indian entity has to be in a currency recognised by the RBI,” said Rashmi Deshpande at law firm Khaitan & Co. She added that since the government has no way of tracking crypto payments coming into people’s private wallets, tax avoidance is expected. 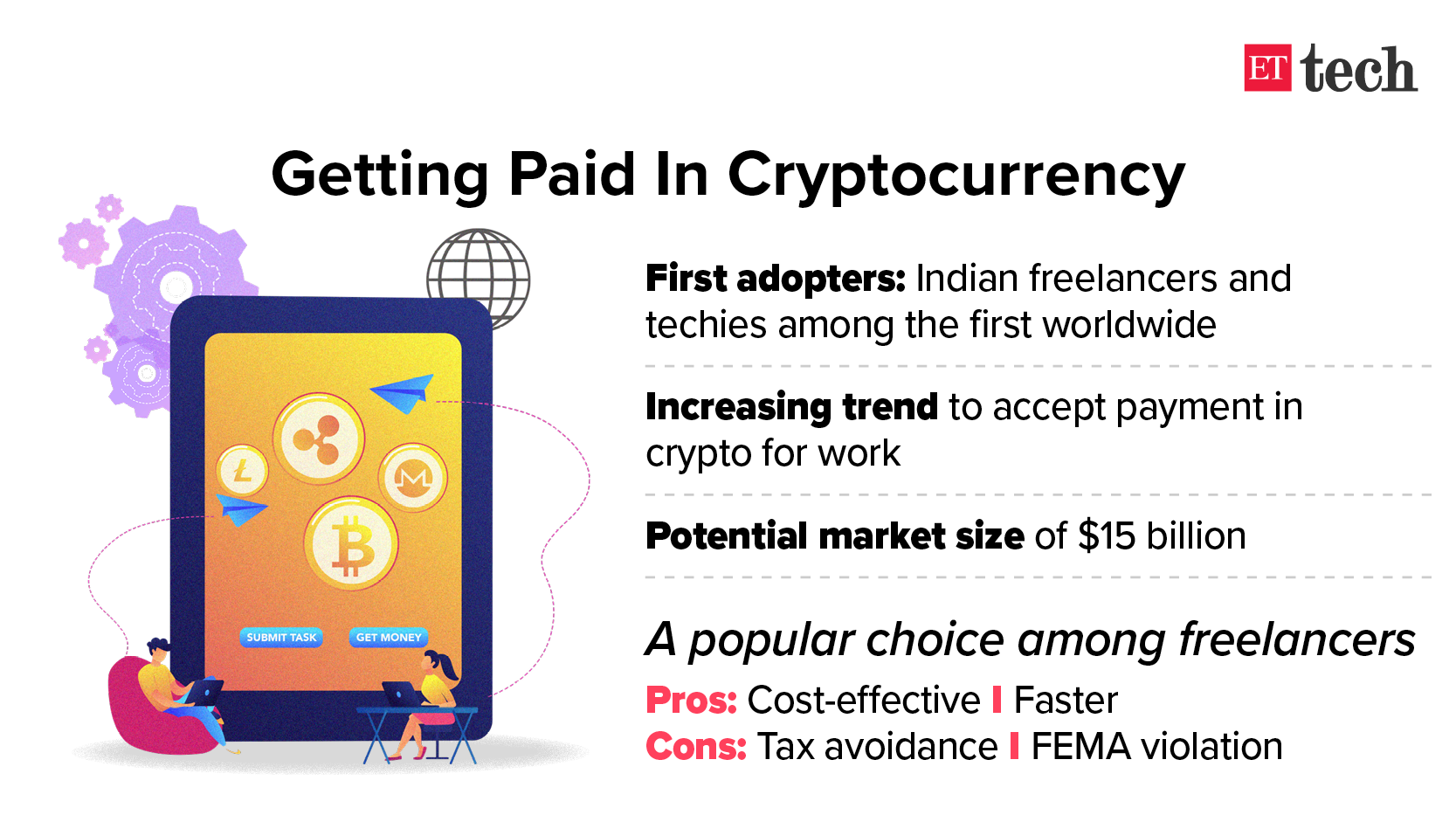 A case in point is a developer from Gurgram, who received his salary from a crypto transaction infrastructure company based in Singapore. He said he has a verbal contract with the company and that he converts his crypto salary into rupees through peer-to-peer exchange within India’s crypto community.

Vikram Subburaj, co-founder and CEO of Giottus Cryptocurrency Exchange, said Indian freelancers, estimated to number around 15 million, were among the first adopters of cryptocurrency in the country.

Others who accept crypto payments said they make sure they take the legal route and pay taxes. Kolkata-based Vaibhav Gupta, who founded a viral marketing company called Desi Crypto for crypto and blockchain projects, said he receives cryptocurrency from clients such as Hedget, Chromia and EasyFi for his services. He has six employees and pays some of them in crypto. The others, who are wary of cryptocurrencies, are paid in rupees, he said.

“We receive the crypto in our Indian exchanges where we have done our KYC and exchange it for rupees. After that, we transfer the money to our bank accounts and are thus liable to pay taxes as per the rules,” Gupta said.

Many contractors ET spoke said that crypto companies — large and small — are typically spread across the world. One company, for example, is registered in Singapore but has a CEO based in London and several contractors in India and other countries.

Tarun Gupta, founder of the crypto treasury management company Parcel.Money, said it is impossible for smaller crypto companies to register entities in multiple countries and comply with the various laws.

“The problem is these companies have to be compliant in all those jurisdictions where they hire someone,” he said, adding, “It is just easier and faster to pay contractors in cryptocurrency.”

The regulatory uncertainty in India does not faze many of these individuals, who continue to accumulate various cryptocurrencies due to their strong belief in the future of the technology.

“As a developer, when you have crypto you have the power to develop useful tools using blockchain technology,” said Gupta, who has also dabbled with the idea of starting a crypto payroll company.

“A clear regulatory framework by the government would support remote contractors and help employees pay their taxes,” he said. “The government needs to put in the time to understand and execute this.”

Akshay Aggarwal, managing trustee of Blockchained India, said he refused consulting contracts worth close to a million dollars from international crypto companies looking to enter India between 2017 and 2019 as they insisted on paying in cryptocurrency. In hindsight, he said, he regrets that decision.

“We missed out on about 80% contracts because of this,” Aggarwal said. “That was our most foolish move.

Article: Many Indian techies get paid in crypto, say it’s faster and easier