The World Economic Forum (WEF) is on track to be at the center of defining what the future metaverse will look like by inserting itself in the metaverse’s creation early on. 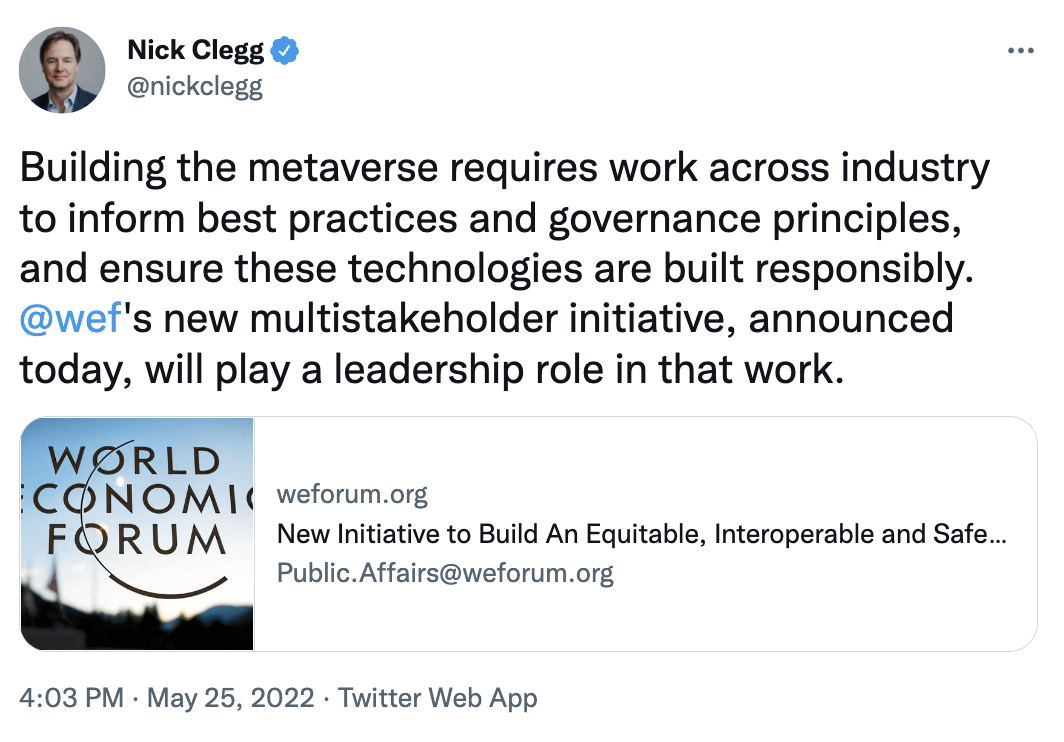 The initiative, laid out in a post on the Davos event’s website, is ambitious: it seeks to provide guidance on creating “an ethical, inclusive, economically viable metaverse,” and represent the link between businesses, regulators, civil society, and academia from both the private and public sectors.

“The Defining and Building the Metaverse” wants to focus on producing governance principles for it, but also on something defined as “societal value creation.” The initiative’s first key area is supposed to determine safe, interoperable and “inclusive” technology and environments for the metaverse, while what “value creation” means is not explained.

The post does, however, say that the initiative will provide information about risks and incentives to businesses and society, as well as individuals.

And, it will “also outline how value chains may be disrupted, industries may be transformed, new assets could be created and rights protected.”

The WEF appears to want to get involved in the creation, and through governance and regulation, ultimately, control of the metaverse in the early stages of its development. The post recognizes that the concept could go in different directions, and the WEF would like to direct it in a particular one, agreed on by those participating in the initiative.

Currently, their number is over 60, including Big Tech. The post cites statements from stakeholders such as Clegg on behalf of Meta, and top execs from Microsoft, HTC, Sony Interactive, as well as Walmart, CJ Corporation, the LEGO Group, Animoca Brands, and others.

Among the 60 or so stakeholders are not only technology and corporate giants and startups, but also academics and representatives of civil society, the WEF said.

What the initiative promises is to give the industry a toolkit for building the metaverse, that is “ethical and responsible” in nature.

According to Nick Clegg, the future metaverse will represent “a force for inclusion and equity.”

And Meta doesn’t want to be held too accountable, either.

“It mustn’t be shaped by tech companies on their own. It needs to be developed openly with a spirit of cooperation between the private sector, lawmakers, civil society, academia and the people who will use these technologies,” he said.

It’s unclear from the WEF document, however, how exactly “people who will use these technologies” are represented as stakeholders.

Article: Meta announces the World Economic Forum will have a leadership role in the metaverse