Nvidia today announced the general availability of AI Enterprise, a software suite of tools and frameworks that enable companies running VMware vSphere to virtualize AI workloads on Nvidia-certified servers. Systems from Atea, Carahsoft, Computacenter, Insight Enterprises, SoftServe, Dell Technologies, and SVA System are now available, featuring a range of Nvidia GPUs including the A100, A30, A40, A10, and T4.

Companies are increasingly embracing AI during the pandemic as they discover the benefits of automation and big data analytics. According to 451 Research, 95% of businesses indicate that they consider AI to be “important to their digital transformation efforts.” A separate survey by McKinsey found that 30% of organizations are conducting AI pilots, and nearly half have embedded at least one AI capability in their standard business processes.

AI Enterprise enables organizations that use VMware vSphere to run traditional enterprise applications while using the same tools they use to manage large-scale datacenters and hybrid clouds. VSphere, VMware’s cloud computing virtualization platform, includes a configuration manager as well as an app discovery dashboard and the ability to move more than one virtual machine at a time from one host server to another. 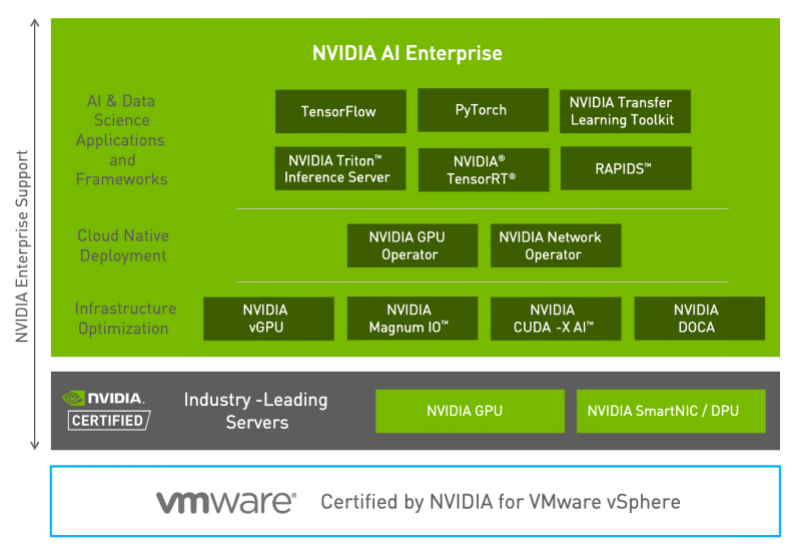 AI Enterprise subscription licenses start at $2,000 per CPU socket for one year and include “business standard” support. Perpetual licenses are $3,595 and require an additional support purchase.

“The first wave of AI has been powered by specialized infrastructure that focused adoption to industry pioneers,” Manuvir Das, head of enterprise computing at Nvidia, said in a press release. “Today is the beginning of a new chapter in the age of AI, as Nvidia software brings its transformative power within reach for enterprises around the world that run their workloads on VMware with mainstream data center servers.”

Das said that “dozens” of automotive, education, finance, health care, manufacturing, and technology companies are among the early adopters of AI Enterprise. Domino Data Lab is validating its data science platform with the service. Conversational AI startup Cerence is using AI Enterprise to develop intelligent in-car assistants and “digital copilots.” And the University of Pisa, an Italian public research university, is supporting high-performance compute and AI training with Nvidia’s software.

If the current trend holds, companies are on track to spend a combined nearly $342 billion on AI software, hardware, and services like AI Enterprise in 2021, according to IDC.

“Partnering closely with Nvidia, we’re deepening our product integrations by enabling the Domino Enterprise MLOps Platform to run with a broader range of Nvidia GPUs and validating it for AI Enterprise,” Domino Data Lab CEO Nick Elprin said in a statement. “This new offering will help hundreds of thousands of enterprises accelerate data science at scale.”