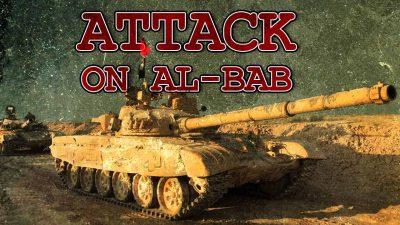 The Turkish Army has been increasing its military presence in Greater Idlib despite the recent withdrawal of observation posts, which had been encircled by the Syrian Army.

Recently, the Turkish military deployed major reinforcements to Mount al-Zawiya. Turkish military convoys deployed to the area included battle tanks and BMC Kirpi armoured vehicles. Mount al-Zawiya is controlled by al-Qaeda-affiliated Hay’at Tahrir al-Sham together with its supposedly ‘moderate counterparts’ from the Turkish-created National Front for Liberation. Turkey has been reinforcing its troops in the Mount al-Zawiya region for the last two months. It has also established several permanent positions in the area.

At the same time, the Turkish military has been undertaking active steps to reinforce its positions along the M4 highway in southern Idlib. Recently, Turkish forces have even started creating watch towers additionally to the permanent observation posts that they already have there.

The situation in northern Syria also remains tense. As recently as January 3, intense clashes had broken out between Turkish proxies and the Kurdish-led Syrian Democratic Forces near the town of Ain Issa. Turkish-backed militants tried to capture the villages of Hwshan and al-Khalidiyah in another attempt to block the part of the M4 highway that runs by there.

These developments came amid cries from pro-Turkish propaganda that the ‘cowardly’ Assad regime and the Russians are planning to violate the de-escalation agreement and to capture the Turkish-occupied town of al-Bab in northern Aleppo.

The SDF keeps apace with Sultan Erdogan and also shows no sign of dropping its attempts to bite off a piece of Syria. On December 30, Sinam Mohamad, a representative of the SDF political wing in Washington, called on US President-elect Joe Biden to recognize the SDF-controlled territory in northern Syria as a de-facto state. This, he claimed, will help to improve the security and humanitarian situation there. The SDF has also repeatedly declared its support for the illegal US presence in Syria and for the US occupation of Syrian energy resources on the eastern bank of the Euphrates.

Under such conditions, there is no surprise that the group’s Kurdish leadership prefers to turn a blind eye to the negative consequences of these ‘democratic actions’. For example, the state of lawlessness created by US-backed forces on territories controlled by them and the Kurdish ethnic nationalism in fact employed by the SDF as an instruction manual for relations with the Arab majority in the SDF-held areas both contribute to the growth of militancy and create conditions for the resurgence of ISIS cells.

Government-controlled territories and units of the Syrian Army on the western bank of the Euphrates regularly experience the resulting consequences of this situation in the drastic increase of ISIS attacks. On January 3, the Syrian Army and local pro-government militias once again launched a combing operation in the vast desert located between the towns of al-Mayadin and al-Bukamal. The goal of the operation is to track and neutralize ISIS cells there. Nonetheless, it is unlikely that this threat can be fully removed without the establishment of full control of the border by the Damascus government and the elimination of US-occupied ‘No-Go Zones’, which are being extensively used by terrorists.