Yes, the Fed is a drunken reckless money-printer, and the US government has been high for years on deficit spending, but other major central banks and governments do the same or worse. The long-term trends are clear, however. 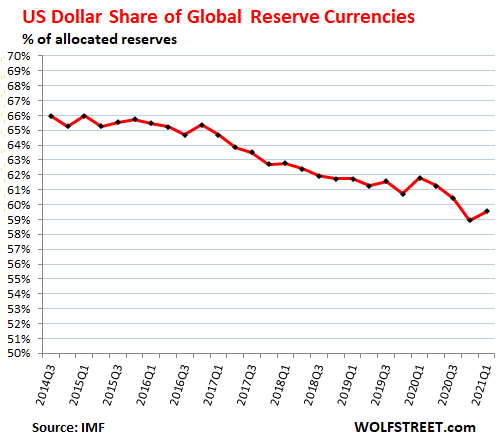 Exchange rates between the dollar and other currencies change the valuations expressed in dollars of non-dollar reserves, such as German government bonds.

This means that nearly all of the decline in the share of the dollar as foreign exchange reserves since 1999 was due to central banks unloading dollar-denominated assets, and not due to exchange rates (data via Investing.com): 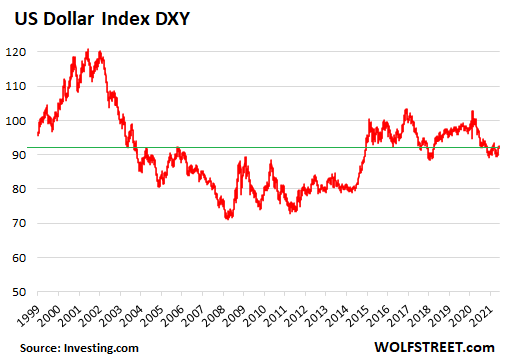 The Fed’s own holdings of dollar-denominated assets – the $5.2 trillion in Treasury securities and $2.3 trillion in mortgage-backed securities, are not included in global foreign exchange reserves.

The dollar v. other reserve currencies

All other reserve currencies combined had a share of 19.9% in Q1. The largest ones are depicted by the colorful spaghetti bunched up at the bottom. The Chinese renminbi is the short red at the bottom: 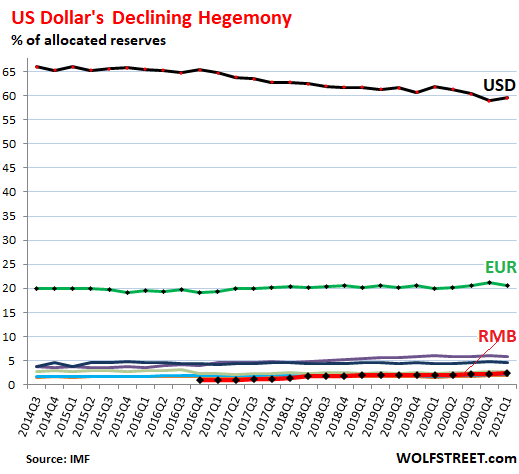 The colorful spaghetti at the bottom

Anyone who thinks the Chinese renminbi is going to knock the dollar off its hegemonic perch needs to be very patient. The renminbi’s share of global reserve currencies is growing at snail’s pace, but it is growing.

What this tells us is that central banks around the world are leery of the renminbi and are not eager to hold renminbi-denominated bonds, though they’re dipping their toes into them.

The chart below shows the “spaghetti at the bottom” magnified, on a scale from 0% to 6%, which cuts out the dollar and the euro. Note the surge of the yen since 2015, which outpaced the slow rise of the renminbi. 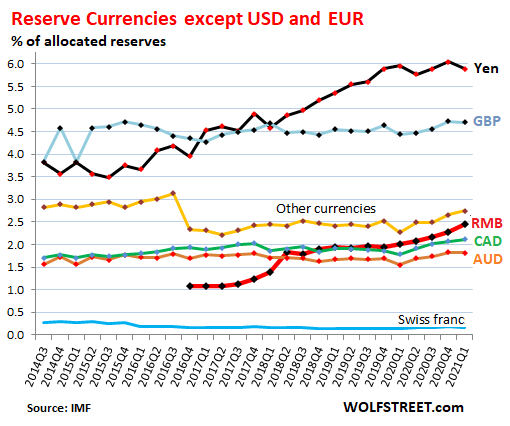