Gen Z is in the crosshairs of the coming climate catastrophe. They have the most to lose – and the most to win if we can allay their climate grief:

“Although Gen Zs comprise 25 percent of the human population (a little more than two billion inhabitants) this ‘climate generation’ claims, and rightfully so, that they own 100 percent of the future. They are tired and angry from being lied to. They intend on forcing societal change because it is their birthright to breathe unpolluted air, to drink nontoxic fresh water and to eat fruits, nuts and vegetables not slathered in nerve poisons and cancer-causing glyphosate.”

Dr. Halter’s book is mesmerizing – not just for Gen Z, but for all of us. It is a fascinating read, full of intricate and engaging realities we seldom encounter.

He first addresses “the beleaguered state of the animal and plant kingdoms – my speciality as a forensic naturalist and ecological stress physiologist.” (p. 15)

Regarding this beleaguerment, although things were dire enough in 2017 when Dr. Peter Carter and I co-authored, “Unprecedented Crime: Climate Science Denial and Game Changers for Survival,” I was not prepared for the extraordinary devastation of the past three years.

Nor was I prepared for such a deep and compelling journey into the plight of individual creatures as their habitats burn and dry up.

To take the bees, with two-thirds of their species already endangered:

“…when New South Wales and Queensland beekeepers ‘went bush’ after the fires to inspect their hives, none were prepared for the unmanning sights and sounds of the wounded wailing animals. “It’s doing their heads in, the screaming animals, the animals that are in pain, that are crying out in the forest, it’s absolutely horrific.” (p. 56)

To change our lives in the ways necessary to slow down this debacle, we first need to feel. Feeling is what the complicit, profit-driven media does not want us to do – unless it’s displaced into systemic racism, me-too, and “hate speech.”

Ignoble as these things may be, they are distractions from the global emergency, which is no longer simply “looming” as it was three years ago – but is here…right now. (The fossil-fuel heat upheaval is occurring decades ahead of worst-case modelling scenarios.)

So Dr. Halter poignantly leads us through Earth’s natural world as it collapses into chaos.  He feels – and in a singular, unexpected way he makes us feel too.

This is a simple but necessary read.  If any book will inspire us to transcend our outdated human habits to preserve the kingdom of natural life on this planet, this is the book.

Chockfull of poetic imagery, Gen Z spills onto page after page as it lures us almost addictively through fascinating eye-openers and insights into nature. And it is second to none in exposing the dark resource-mauling underworld, countered by some amazing heroes of resistance.  (All Halter’s claims – which are casually yet competently readable – are backed up with accessible references.)

Here you will get an insider education that you won’t find anywhere else.  And I guarantee that it will fire you up, as it did me:

“Old-growth rainforests are supreme climate stabilizers, flying rivermakers, castles of biodiversity and superlative CO2 stockpilers. As they age, the ancient ones get even better at turning atmospheric carbon into woody warehouses. Where there are old-growth forests, it is wet. In a hot world, freshwater is king. Quite simply, primeval (old growth) forests are unparalleled planetary gatekeepers, the Gen Z’s legacy. Every living old-growth forest requires immediate protection from bulldozers, chainsaws, poachers, ranchers, miners and fossil fuel extracting planet-killers. Bring on the Universal Declaration on the Rights of Mother Earth and grant The International Court of Justice (ICJ) at The Hague the authority along with the enforcement obligations to get this imperative life-sustaining job done.” (p. 120)

All of nature has been in harmony, unappreciated by humans, for eons:

“The biodiversity on this planet is mesmerizing! There are about two million different forms of life and possibly 10 times that yet to be found. What we see today in nature is the result of 1.2 billion years of reproductive evolution. Every single organism is wonderful, timetested, sculpted by the environment and perfected. All life exists within a habitable range of temperatures. Migrating animals time their reproduction to a temperature cue. In turn, they depend upon a plentiful food source of prey, greened-up vegetation, insect blooms or aquatic life-forms for their offspring. When temperature spikes or habitats are destroyed or poisoned, life ceases. At all costs, we must protect Earth’s incomparable interconnected web, its biodiversity!” (pp. 93-94)

Yet we have been totally disrupting this balance. The predators we have been happiest to kill have protected vast tracts of vegetation from being grazed and removed from the carbon capture cycle.  Wolves formerly culled ungulates who now over-graze river-banks. Sharks culled marine dwellers who now over-graze wetland sea grasses, releasing their carbon. 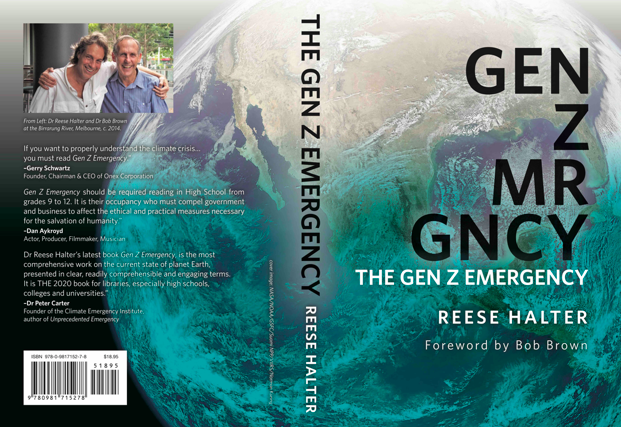 We emerge from this book with the fine appreciation of nature’s miraculous web that will move us to voluntarily suspend our disruption.

Solutions are where it’s at, and this book abounds with peaceful revolutionary answers.

Back to the endangered bees:

“Lawmakers in the Netherlands…prudently allocated $38.5 million to repair bee populations by rewilding floral patches throughout the nation.” (p. 140)

To encourage bees, billions of people could be planting wildflower seeds around their dwellings and neighbourhoods.

Similarly, regarding the destruction of massive old-growth forests – the “weathered living monuments” that were seedlings when vegetarian Leonardo de Vinci died in 1519 –

“Indigenous Peoples don’t plant trees, instead, they grow them. Across Africa, the Indigenous Peoples are growing trees, food, medicines, shade, increasing water yields and circumventing the sprawl of the Sahara Desert.” (p. 119)

Insects have also been decimated. Halter highlights “a solution for over 200,000 kinds of insects that man-made nerve poisons, like neonics and others, currently target”,

“Apart from banning these terrible poisons worldwide, a solution may be found by replacing them with natural and safe ‘smart’ biocides…based upon certain fungi conferring incredible resistance to the plants…making them unattractive to the pests. This solution doesn’t kill the insects, rather, it allows them to coexist in the fields…

“Economic growth at the expense of all life is an unnecessary evil.”

The author quantifies our insanity:

“Ninety-six percent of all mammals are now livestock or humans. Just four percent are wild animals. Scandalous. Farmed caged birds comprise 70 percent of all birds left on the planet. Cattle, pigs and sheep account for 60 percent of all living mammals. The other 36 percent are humans. Livestock uses 83 percent of farmland to produce a meager 18 percent of the human population’s calories and 37 percent of its protein.” (p. 164)

Where to begin? Halter cites the “sagacious advice on transformative changes of Sir Robert Watson, the British atmospheric chemist who chaired the 2019 UN panel on Biodiversity”, who says that we need

“a fundamental, system-wide reorganisation across technological, economic and social factors, including paradigms, goals and values. We need the guidance, knowledge, innovations and practises, institution and values of the Indigenous Peoples front and centre in order for civilisation to survive.” (p. 163)

Halter cites Victor Hugo that “no army can withstand the strength of an idea whose time has come”. He then asks, “Is not protecting life on Earth the greatest of all ideas? Its time has certainly come.”

This is where Gen Z comes in – to revolutionize our path towards the peaceful, respectful values of Indigenous Peoples worldwide. Their values are being translated into action:

“Many Gen Zs worldwide are refusing to accept the predatory debt loads of tertiary education institutions. Instead, they are embarking upon becoming makers, growers, readers, thinkers, reimaginers, walkers, cyclists, tiny foot-printers, caretakers of nature and tiny home occupants. They own their tiny dwellings and they’re having fun. These Gen Zs are good at fixing and building things, and they’re especially gifted at repurposing materials. They embrace two central concepts: there’s no waste in nature and that diversity within ecosystems equals strength. These Gen Z makers are both problem-solvers and toolmakers. They have a fresh way of looking at the world.” (p. 147)

These responsible values can be further achieved through nonviolent mass civil disobedience, which is twice as likely to succeed as violent insurgence, according to Harvard professor Erica Chenoweth and Maria Stephan, of the US Institute of Peace. Incredibly, they reported, 3.5 percent of a population becoming active could force societal change.

“All Gen Z warriors instinctively embrace the following dictum: ‘Forti nihil difficile – To the brave nothing is difficult’”. (p. 136)

“These congenial Gen Z caretakers have deliberately replaced fear with:  truth, compassion, action, and love of nature and Mother Earth. Instead, they also seek peace, joy, harmony, curiosity, and love of being.” (p. 168)

The greatest literary works of all time owe their power to the deep and sacred feelings they evoke in humanity. We are not small people:  We have the Great Spirit within us and we can rise to meet the challenge if we allow this magnificent book to penetrate our depths.

It is a masterpiece.