Technocracy News: United Nations is gunning for total control of the internet, seeking to morph it into a digital brain As TN has warned for 12 years now that the United Nations is gunning for total control of the Internet, seeking to morph it into a digital brain that can control everything and everyone on earth. The aim is total social control and behavior modification to suit Sustainable Development, aka Technocracy. — Technocracy News & Trends Editor Patrick Wood

The seventh commitment in Our Common Agenda is about improving digital collaboration through the creation of a “Global Digital Compact”.[1] This means that all people should be connected to the Internet, that liability criteria for discrimination and misleading content should be developed, that artificial intelligence should be regulated, and the establishment of the “Digital Commons” as a global public good. However, the whole thing is more comprehensive than that. By extension, this constitutes the construction of a digital World Brain intended to regulate and control all human life to keep it within the planetary boundaries.

The commitment is one of the more central ones and is about creating a consensus on the need for total digitization. This builds on the recommendations made in the report The Age of Digital Interdependence (2019) by the UN High Level Panel on Digital Cooperation led by Melinda Gates (Bill & Melinda Gates Foundation) and Jack Ma from the Ali Baba Group and in collaboration with actors such as the World Economic Forum and their Center for the Fourth Industrial Revolution.[2]

At the “Summit for the Future” in 2023, the UN, together with civil society and the private sector, are expected to agree on shared principles for an “open, free and secure digital future for all”.

This includes promoting a “trustworthy Internet” with accountability criteria for discrimination and misleading content as well as regulating Artificial Intelligence to be consistent with “our shared global values”. However, what this means in practice is that the “values” must correlate with the beliefs held sacred by the UN and WEF (see The Ministry of Truth).

Secretary-General António Guterres writes in Our Common Agenda that one of the risks of the Fourth Industrial Revolution is “the use of digital surveillance and manipulation to influence behavior and control populations.”

This very legitimate concern, however, is more about the fact that the UN does not want this technology to fall into the hands of forces that they themselves or their partners do not control. This is because the whole idea behind the “Global Digital Compact” is to be able to control the world’s population and align its values ​​to be in line with the UN’s and WEF’s interpretations of the 17 Global Goals of Agenda 2030.

A concrete example is the initiative Coalition for Digital Environmental Sustainability (CODES), which was formed after the launching of the UN Roadmap for Digital Cooperation in March 2021 with the aim of promoting “digital sustainability”.[3] The coalition currently gathers around 1,000 stakeholders from over 100 countries.[4] 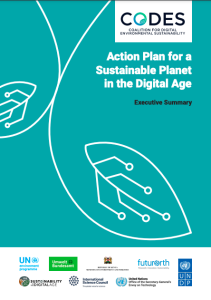 Founders of CODES are UNEP, UNDP, International Science Council, The German Environment Agency, Kenyan Ministry of Environment, Sustainability in the Digital Age and Future Earth. The latter organisation has a key role in the agenda and are part of the Global Commons Alliance initiative, which I will return to in the last installment of this series – Be Prepared.

CODES works to implement collective system changes and remove any obstacles standing in the way of the total digitization that they believe is needed to implement the sustainability goals (70% of the goals can be achieved through the application of digital solutions according to a study that CODES refers to).

During the environmental conference Stockholm +50 in June 2022, CODES presented its action plan which aims to inform about the priorities included in the Global Digital Compact. The report describes three system shifts, eighteen strategic priorities and nine “global impact” initiatives that will give rise to the “desired” change.[5]

These systems shifts are: 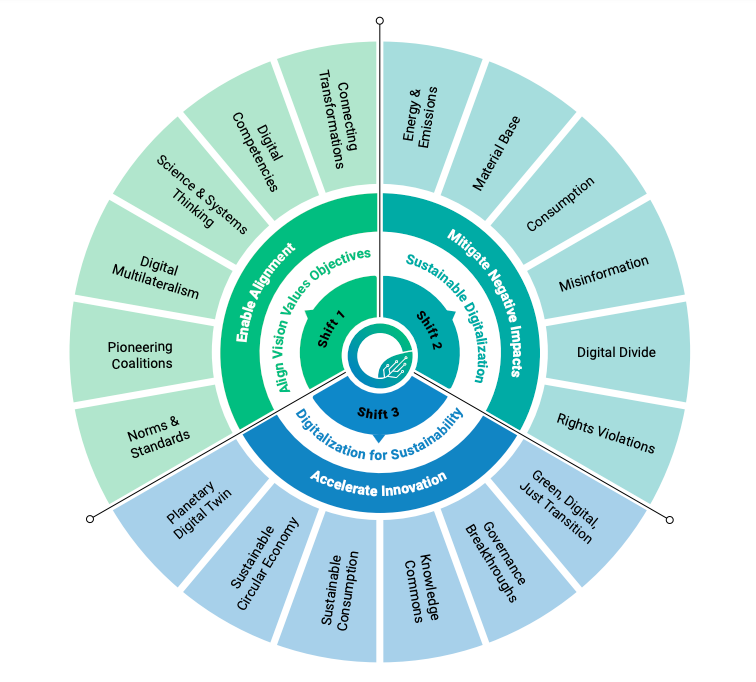 In order to achieve the goals, the establishment of a “World Commission on Sustainability in the Digital Age” is proposed with the aim of conducting research and offering scientifically oriented information on how sustainability should be achieved in the digital era. Their conclusions, in turn, will form the basis for a global platform (Clearing House for Digital Sustainability Standards) that develops digital and financial sustainability standards. This knowledge is then to be disseminated through decentralized education programs.

In order to deal with the negative environmental and social effects from energy use, greenhouse gases, material use, consumption, digital divides, violations, and “incorrect information”, it is proposed, among other things, that platforms for reporting and comparing companies’ greenhouse gas emissions and that digital product passports be introduced with the aim of being able to follow a product entire life cycle. The latter is part of the circular economy and will eventually also be used on us humans. It is a new ecosystem in the making where everything is to be connected in order to measure degree of sustainability. A World Brain that analyzes and keeps track of everything and everyone.

Among the examples of how problems with incorrect information should be handled, Facebook’s “Climate Science Center” is highlighted. The climate issue is the cornerstone of the agenda. As of the Paris Agreement 2015, the science is considered to be settled and no more debate or nuance in this field is to be tolerated.

The spread of misinformation about planetary sustainability topics such as climate change, biodiversity loss or pollution can undermine collective action and trust in institutions as well as magnify polarization and mistrust between divided groups.[6]

Instead, “incorrect information” on the web must be corrected and visitors instead provided with the United Nations’ “verified” climate information.

The third area concerns the development of digital innovations that promote environmental and social sustainability. This includes “digital twins” and the construction of a digital copy of the Earth that will be used to monitor and predict the interaction between natural phenomena and human activities. A kind of digital crystal ball.

Digital twins combined with AI have the capability to conduct automated monitoring of risks and threats to key protected areas (either natural or cultural areas under global protection frameworks), ecosystem services or endangered species.[7]

The EU project Destination Earth, which is linked to the EU’s Green Deal and Digital Strategy, aims to develop a full digital replica of the Earth by 2030.[8]

DestinE will unlock the potential of digital modeling of the Earth system. It will initially focus on the effects of climate change, water and marine environments, polar areas, cryosphere, biodiversity or extreme weather events, together with possible adaptation and mitigation strategies.

This is very similar to the geocybernetic visions that papal adviser and former head of the Potsdam Institute of Climate Research (PIK), Hans Joachim Schellnhuber proposed in the late 1990s.[9]

There are currently 267 initiatives linked to CODES that are working on implementation.

One of the initiatives included in CODES is The Green Digital Finance Alliances and the Finance for Biodiversity Initiatives (F4B) project Every Action Counts Coalition.

Digital tools can empower consumers to make and demand sustainable consumption choices and receive feedback on their behaviours.[10]

On the website, they write that two-thirds of carbon dioxide emissions are linked to human consumption and that they will “creatively leverage technology and partnerships to increase green awareness and green actions among 1 billion green digital champions worldwide by the year 2025”. The citizens, who according to The Green Digital Finance Alliance want immediate change, should be encouraged to make climate-smart choices through a rating system. Every purchase is registered and assessed according to the climate benefit.[11] In this way, the necessary behavioral changes will be achieved.

Article: UN’s Digital World Brain Seeks To Track Everything And Everyone