A recent study found the highest RFR levels in areas where the cell phone base station antennas were placed on top of utility poles, street lamps, traffic lights or other posts near to the street

Worldwide opposition to 5G deployment has been ongoing for years and this has limited, slowed and/or stopped deployment in some locations.  Since 2017 doctors and scientists have asked for moratoriums on Earth and in space (see 1, 2) and the majority of scientists oppose deployment.  Since 2018 there have been reports of people and animals experiencing symptoms and illnesses after it was activated (see 1, 2, 3, 4).

In 2019, telecom executives gave U.S. congressional testimony that they had NO scientific evidence that 5G is safe.  Some researchers have claimed that 5G activation may be contributing to COVID-19 infections while others say it’s not.  Nevertheless, in 2021, a federal court ruled in favor of organizations and petitioners that sued the Federal Communications Commission (FCC) for NOT adequately protecting Americans from wireless radiation exposure (including 5G and 4G).  Despite the ruling, the FCC (see 1, 2, 3, 4, 5, 6, 7, 8) as well as other government and state agencies and committees (see 1, 2, 3, 4, 5, 6) continue to promote and fund the deployment and densification of both 5G and 4G infrastructure.  Your neighborhood could be next!

Thanks to Environmental Health Trust for publishing a study on its website about excessive radiation levels already measured in Columbia, S.C.:

WASHINGTON, April 27, 2022–A recent study in the World Academy of Sciences Journal measured levels of radiofrequency radiation (RFR), from wireless networks including 5G, in the city of Columbia, South Carolina and found the highest RFR levels in areas where the cell phone base station antennas were placed on top of utility poles, street lamps, traffic lights or other posts near to the street. Wireless installations called  “small cells” often encapsulate cell antennas in cylinders on short poles and are designed not to be noticeable. The paper included several graphics showing how the RFR is emitted out from the antennas and exposes people walking down the street. 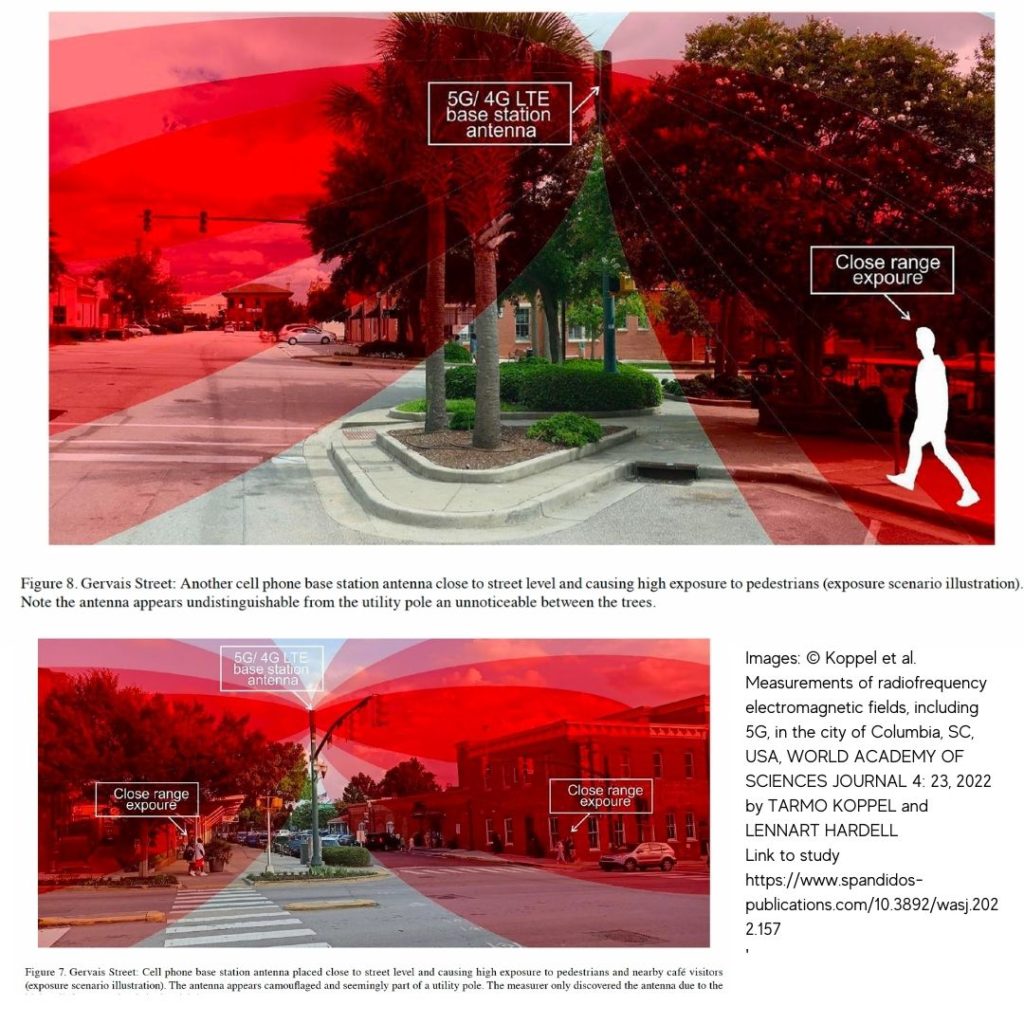 On the whole, 3,943 single measurements were conducted all over the downtown area over five days in 2021 with the aim of measuring public exposure from the city’s RF infrastructure. When the study’s authors compared their findings to a 2019 published review on the mean outdoor exposure level of European cities (0.07 to 1.27 V/m) to the mean of Columbia, South Carolina (1,240 V/m), it placed Columbia on top of the European scale.

On the whole, 3,943 single measurements were conducted all over the downtown area over five days in 2021 with the aim of measuring public exposure from the city’s RF infrastructure. When the study’s authors compared their findings to a 2019 published review on the mean outdoor exposure level of European cities (0.07 to 1.27 V/m) to the mean of Columbia, South Carolina (1,240 V/m), it placed Columbia on top of the European scale.

The Columbia, S.C. study concluded that the highest exposure areas were due to two reasons:  cell phone base antennas on top of high-rise buildings provide “good cell coverage reaching far away, but creating elevated exposure to the radiofrequency electromagnetic fields at the immediate vicinity; and cell phone base station antennas installed on top of utility poles have placed the radiation source closer to humans walking on street level.”

The conclusion continued, “RF exposure levels from mobile phone base stations antennas near the street level reached high levels. It is thus recommended that all such close proximity transmitters should be labeled with relevant signs to warn of high RF exposure in the area. The study pointed to a the New Hampshire State Commission Report on 5G which has 15 recommendations including that warnings that be posted near antennas.

The Columbia, S.C. study conclusion continued, “Cell phone base station antennas should be distinct and noticeable so that people who need to limit their exposure, have been given a chance to do so by distancing themselves from the RF sources. Considering the current trend of cell phone service providers expanding their 5G network, more utility pole base station antennas are expected. Consequently, the public exposure is also likely to increase in coming years.”

When asked about this and prior studies, Lennart Hardell, M.D. (co-author of this study,) stated “Our published research has concluded that RF radiation is a human carcinogen. We recommend that 5G is not rolled out since the full consequences for human health and the environment have not been adequately investigated. Studies are urgently needed.” Hardell is an oncologist and professor and is also with the Environment and Cancer Research Foundation Sweden. Hardell also served in an expert working group of the World Health Organization International Agency for Research in Cancer in reviewing radiofrequency radiation and health.

Dr. Hardell is one of the more than  400 scientists and physicians who have signed the European Union 5G Appeal which states, “5G will substantially increase exposure to radiofrequency electromagnetic fields (RF-EMF) on top of the 2G, 3G, 4G, Wi-Fi, etc. for telecommunications already in place. RF-EMF has been proven to be harmful for humans and the environment.”

Over 3,500 medical doctors signed onto a 2020 Consensus statement that wireless RF has been proven to damage biological systems at intensities below government limits (See signatures here, PDF of Consensus Statement).

Thousands of doctors and scientists are calling to halt 5G because of the increase in radiofrequency radiation- a new kind of environmental pollution.